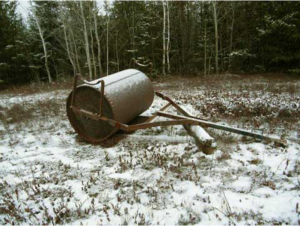 Long before the town of Capreol had snow removal equipment the community used to roll the snow on main street in order to pack it down. Fred Lammi shared the above picture of our town’s original roller, slowly rusting away at the Lepage farm, former home to MOUNTAIN VIEW DAIRY (see accompanying photo).

Given the often poor condition of Capreol’s roads since amalgamation it makes a person wonder: maybe we should pull the old roller out of retirement and put it back in service?

Of course the town had another equally effective and even more iconic piece of surfacing equipment: Capreol’s first Zamboni.

An eagle-eyed reader named Patrick came across the following January 1968 article, which he believes (and we agree) is of Capreol’s first Zamboni.

CAPREOL – The Capreol Community Arena has received a mechanical ice shaver from the Womens Auxiliary to the Arena Board. Mrs. Rita Hawreluk, wife of Mike Hawreluk, brakeman and president of the W.A. (second from left) presents the ice shaver to Don Nelson, financial secretary of the Board and manager of National Steel’s Moose Mountain Mine here.

Nelson said: “We are most happy to receive this piece of equipment. It means that we will be able to have more ice time, and more ice time means more productive time for the Arena and more community participation in Arena activities. Because of the Auxiliary’s efforts,” he said, “It has not been necessary for us to approach Town Council for financial assistance and that makes Auxiliary members VIP’s in Capreol. The W.A. has also made a sizeable donation towards the new artificial ice plant. Bev. Smart, treasurer of the W.A. says their membership now stands at 82 which numbers should be substantially increased before they start on their next project.

Mooch Delgreco adds to the story writing: “The article brought back a lot of memories.

I was on the Arena Commission during those years and I recall when I was Chairman of the artificial ice fund raising committee (in…I think 1963) when we raised $60,000 to install artificial ice. This was installed mostly by volunteers, men and women, which saved an awful lot of money. Sometime after the ice was installed, the women’s auxiliary gave us a cheque in 1968, I think it was for around $3,000, to purchase an attachment that would go on the back of a Ford tractor for the purpose of cleaning and flooding the ice. We then required a tractor to hold the cleaning and flooding attachment.

We had hired the late Walter Arlt as our Arena Manager previously and of course he became a quick learner as to how to operate of the new ice resurfacer machine.

The ice resurfacer was not a “Zamboni” as such. Zamboni was an America Company, I believe, in California. Shortly after we started using the new machine, the Capreol Arena Commission—and I recall this very well—received a lawsuit from lawyers representing the Zamboni Company, suing us for infringement of the Zamboni patent. You can imagine how upset we were when this happened! We didn’t have any idea that the mere purchase of a tractor and an attachment would be an infringement of anybody’s patent. (There were several other arenas in Canada who were faced with the same law suit.)

Anyhow, to make a long story short, after a long period of time and legal advice, we settled for a payment of $1,000.00 to Zamboni and the lawsuit was settled and dropped. We were prepared to fight the lawsuit but we were given advice against going that route by our legal council because of cost and the strong possibility of losing the court case. So we settled.

I thought you might been interested in a little additional history about Capreol and its first “Zamboni”.”

The “legal troubles” described by Mooch wasn’t the first incident between our little town and a vast corporation. Capreol once took CN Rail all the way to the Supreme Court…and won. But that is a story for another day. Until then, be careful out there—snow and ice can be both fun and treacherous.